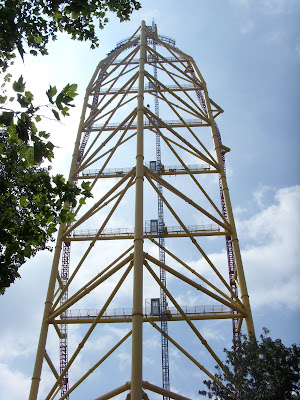 The enormous, 420 ft. tall, 120 mph, Top-Thrill Dragster
We rolled into Sandusky, OH, home of the great Cedar Point Amusement Park and some of the biggest roller coasters in the world, on Wednesday 6/25. The firefighters invited us into the break room, where most of them were eating dinner, and we started talking about our trip. They were really cool guys. One of them bought us some "pop" and the whole shift pitched-in to buy us dinner. Alex gave us some spending money and some money for the charity and when the crew found out that we were visiting Cedar Point in the morning, Jeff and Zach gave us their tickets to the park.
While we were hanging out and eating dinner, the thunder storms hit again. We still had another twenty miles to ride that night from Sandusky to Fremont but the weather was terrible and dusk was approaching. When they saw how bad the thunder storms were they invited us to stay the night in the firehouse. We had our own rooms with beds and we got to use their shower and laundry room. That night we hung out for a bit, watched a movie and got a great nights sleep, out of the rain. They were an awesome group of guys and seemed very tight.
In the morning, Jeff, one of the firefighters took us out to eat for breakfast and back to his house to hang out while we were waiting for the park to open. We played some Call of Duty 4 on his Xbox and I owned Jeff and Dwight. Jeff and his wife gave us some spending money for the park and invited us back for dinner, after the park. We had a great time at Cedar Point and riding all the roller coasters but I probably had the most fun ripping down the street in Jeff's ride. Sooo sweet. 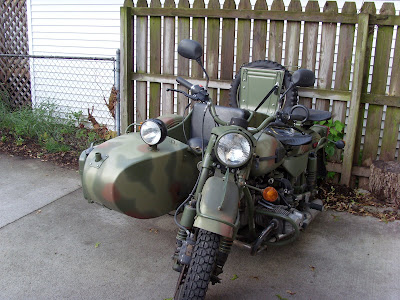 A Russian made motorcycle and side-car. It was a stolen German design. It even had a machine gun mount on it....
Posted by Ryan at 2:57 PM

dwight is just not very good at video games, is he?