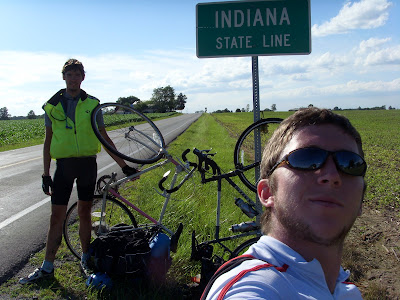 After a long and flat western Ohio, we crossed into Indiana on Saturday night, June 29th. After our entrance into Indiana, we started looking for a spot to rest our heads for the night and found the next closest town on our route, Auburn. We stopped at the first fire station we saw entering the town and talked to the firefighters on duty, Gabe and Joe, for a bit about our trip and the charity we're riding for. They found out we were camping for the night and cleared it with the chief so we could set up camp on their lawn for the night but when I asked if there were any places to get some dinner around there, he replied, "you're better off downtown if you're looking for that sort of thing, we only have live cows around here."

Joe called the downtown station and said it would be fine if we camped on their lawn but when we got there we were pleasantly surprised. Tony and Jim, the firefighters on duty invited us to take showers in the station and showed us the fire-training area outside, behind the fire station. They said it would be fine if we set up camp in the "Survive-Alive" house, a house fully furnished, to demonstrate to kids what it would be like, and what to do, in case a fire. We were happy to call it home for the night. 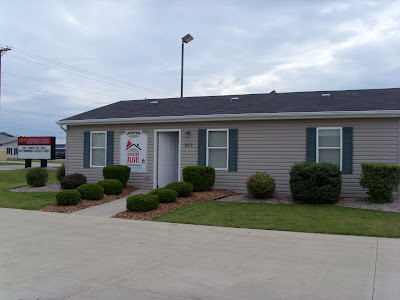 We've been having to avoid route 6, The Old Confederate Highway, which is the most direct way east-west in northern Indiana. Route 6 is just too busy and unsafe to ride on. Because of this, we have to traverse the state along back roads that parallel route 6. There are many positive, beautiful aspects about doing this, even though it means more mileage and planning, but it also means some negative things, like country dogs. Country dogs are ferocious, territorial and great sprinters. The least these dogs do to bikers is bark violently at us as we pass by. This is terrifying because some of the time, the dogs chase after us, trying to bite at our ankles, tearing us from the bikes and try to kill us. Every time this happens, Dwight combats it with sweet-baby-talking these dogs to pacification. I had my doubts at first about his tactics but just yesterday I saw a dog lunging for him until he talked to it sweetly and it just lost steam and quietly backed down. You could see that the dogs still want to attack him but just don't have it in them to tear him to shreds when he talks to them like that...
AND by the way...I forgot to mention in previous posts, the quote of the trip, so far...the story goes like this: I believe we were in New Jersey and it was one of those really hot days when we were traveling hilly terrain, not going anywhere fast. Dwight and I weren't saying much to each other through the grueling ride to conserve strength, until we came to a small downtown area of a small town in NJ. It was about that time of day, so I asked Dwight if he was hungry for lunch. (I think up until this point, we were having sit-down meals for lunch) He said yes, so we stopped at this "food-mart," which was barely that, a small building that had as much variety of food as a gas station. So, I scrounged up whatever I could find...some cashews, chips, protein bar and some orange juice and payed for it. I went outside and starting eating my food quickly so we could get back on the road as soon as possible. Then...Dwight came out the food mart door with an orange juice in his hand...(and this was what led to the quote)..."Dwight, I thought you were hungry for lunch, what the hell are you doing with just juice?...(and with a tired, disgusted, valley-girl face on and gesturing with his hands) he said; "I DON'T have an appetite for SNACK FOODS, SNACK FOODS are not LUNCH, you asked me if I was hungry for Lunch, Snack Foods are Snack Foods!...I could've died laughing and I told him I should've brought one of my sisters, instead. We both couldn't stop laughing about it, afterwards.
Posted by Ryan at 1:02 PM