Gettysburg and the Katies!

As we rolled into Gettysburg a bit later than usual, past sunset, we stopped at a gas station on the side of route 30 to grab some food and water for the night so we could comfortably camp on one of the Gettysburg battlefields. I filled up my water bottles and picked up a drink from the cooler. As i was getting into line I noticed a girl at the back of the line around my age, dressed interestingly, wearing a top-hat...So i started some small talk, we paid for our items and went our separate ways. While I was outside watching the bikes and waiting for Dwight to fill up on water and grab some food for the night, the girl with the top-hat drove by with her friend, she beeped and drove away...I was a bit puzzled but kind of shrugged it off...until I was hanging out for a bit by myself and they came back! I talked to both girls, Katie and Katie, for a bit and they asked if Dwight and I wanted to go to the diner with them, which was right down the road...Dwight was about it and so was I, so we went...

Katie and Katie were the two girls in the car and they introduced us to some of their other friends at the diner. We talked for a while but it was getting late so we mentioned that we were gonna head off. Chelsea, Katie's friend knew a fellow by the name, Adrian that lived down the road and asked him over the phone if "a couple of her friends could stay at his place for the night.." He said yes! He let us shower at his house and showed us his artwork and his brother's band, Infraction.

It would have been cool to sleep on one of the battlefields but meeting people like we did in Gettysburg is the best part of a trip like this. 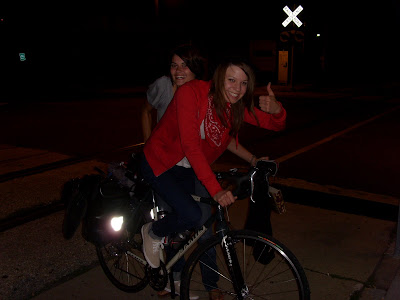 Chelsea and Katie
Posted by Ryan at 3:46 PM