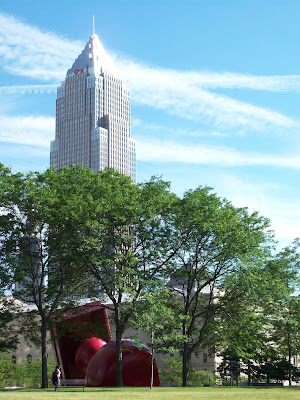 The American Public Transportation Association named Cleveland's RTA the best public transport system in North America for 2007. We took advantage of the distinguished network to travel from our suburban hideout to downtown, where we visited the Rock and Roll Hall of Fame (or "Rock Hall" as we kept hearing it). It was an interesting place, for some reason it felt different from any other museum I had been to before, but I couldn't figure out why. Eventually I realized that it probably had something to do with the fact that it was full of totems, artifacts and accessories to the art rather than the art, itself, kind of like an art museum full of famous painters' brushes instead of their paintings. There were some sections which described the progression of the art form, its historical roots, etc., but the exhibits seemed mostly to be invested in exploiting the aura of these sacred objects, the guitars and costumes of rock legends, even sometimes the seemingly irrelevant minutiae of their lives (Jim Morrison's middle school report cards, for example). 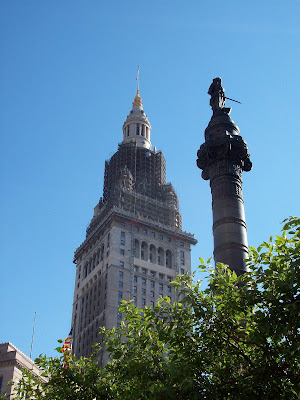 Anyway it was cool to see all that stuff, just a bit overwhelming, especially since we showed up less than two hours before closing. A highlight for me was an old collection of Beatles singles called "Incredible!" whose cover picture the members draped in cuts of raw meat and dismembered baby dolls. Apparently this cover art was not well received by the American public, and was quickly changed, putting the copies that survive among the most coveted of Beatles paraphernalia.

In the evening we explored the warehouse district with Jason. Thanks to Jason for being a wonderful host and welcoming us into his beautiful home. Its distinctive furnishings include a urinal in the basement, an area affectionately referred to as the "man cave." 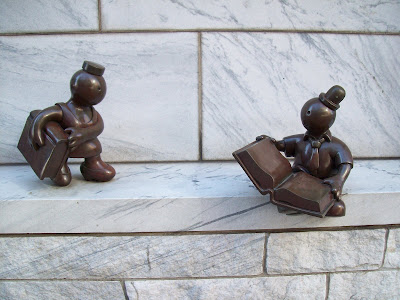 These guys were in front of the Cleveland Public Library 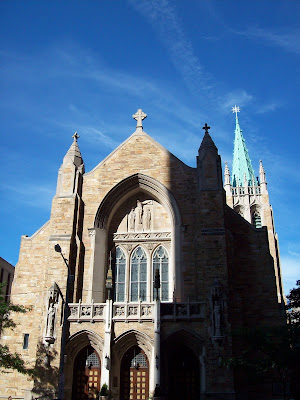