The tall grass swayed in the wind while its roots gripped that ground which had been watered by the blood of thousands, and the tears of countless others. This morning we stood by the stone monuments that marked their graves, and spent a solemn moment feeling the weight of all those young lives that were spilled out on those now quiet hills.

West of Gettysburg the hills felt steeper than they looked, probably having a lot to do with the wind coming down off of them, which made it a slow-going start, today. Some sun-showers drizzled benevolently down on us as we struggled up a long, steady climb. We passed what looked like a rain-induced auto-accident, a pick-up had skidded off the road, coming to rest in somebody's fence at the end of a trail of disrupted earth. It looked like someone else's bumper might have been involved, too. A woman was standing at the road side on a cell phone with her hand on her forehead, but she sounded calm. It didn't look like anybody was hurt, thankfully, but as we rode on all kinds of ambulances and firetrucks flew passed us in the direction of the accident.

We're sitting in the Grove Family Library in Fayetteville, on our way up Route 30 to Pittsburgh. About 160 miles and The Appalachians remain between us and Steel Town. 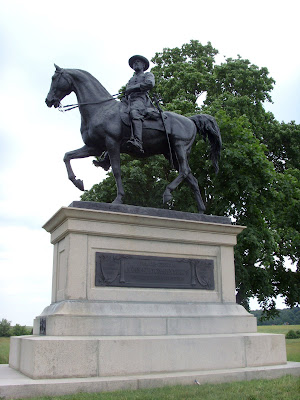