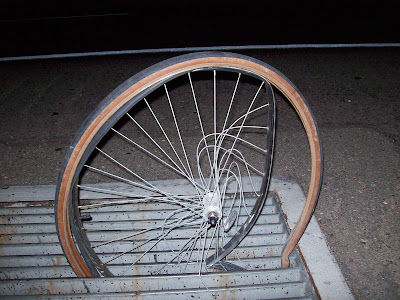 Out of Las Vegas we rode 45 miles and over the border into California, where we camped in a state wildlife area just short of The Mojave National Preserve.  The next day we rode over a mountain pass called "Mountain Pass" and down into The Mojave Desert, the hottest part of our route, where temperatures were getting up around 110 degrees. 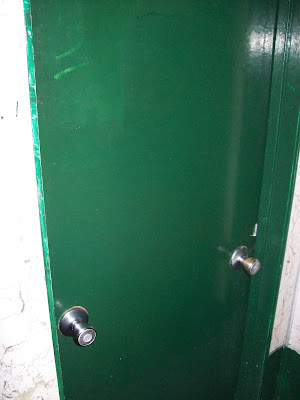 You know a place is classy when the bathroom door has two knobs.  This was an excellent Mexican restaurant in Baker which, as far as I could tell, was called "Mexican."
We stopped in Baker for most of the afternoon, and as the sun went down and things started to cool off a bit we set out to put on a few more miles before bedtime.  Down Route 15 the most embarrassing and maybe the scariest event of the trip took place.  Everything in silhouette against the headlights of oncoming traffic, the strength of my little light not enough to illuminate more than major obstacles in my path, I could not see the storm drain until it opened up underneath me, like a great square hole in the earth.  It swallowed up my front tire and sent me over the handle bars and skidding down the black top.  It was like a slip and slide, only less fun.  I was banged up a bit, particularly in the left shoulder area (my left arm had been rendered useless, for the moment), but still had aspirations to pull my wheel up out of the drain and keep riding along (slowly) until I turned and saw the wheel's condition.
Like a liquid it had taken the form of its container, pouring down into the drain and spilling over the far lip, then resuming its solid phase in permanent testimony to that moment of trauma.  Its shape was the saddest thing I had ever seen, a gesture of defeat, of an abrupt, violent end, the rim collapsed, the spokes coiled inward like a spider holding her stomach.  Sad, sad, sad.  Ruined.
Nobody stopped, but somebody called the police, and an ambulance showed up.  I told the drivers I didn't think I needed a ride to the hospital, but they offered to give us a ride back to Baker so we could hitch a ride to Barstow, the next town with a bike shop.
I had read somewhere that making a sign with your destination on it is a useful hitchhiking technique, because if people register that you are going where they are going they are more likely to stop, or something like that.  The best I could do was scratching out "Barstow" in the thickest letters I could manage with a pen on a brown paper lunch bag from the gas station.  It might have improved my chances, but not enough to get anybody to stop.  Then I thought I would switch up my tactic, and let my mangled wheel tell the story, but that was no more effective.  It probably just looked more menacing.
So I just got turned down dozens and dozens of times, standing on the on-ramp holding up, alternatively, a paper bag and a broken wheel with my one good arm.  Meanwhile, Ryan was having similar luck talking to people at the gas station (at least they looked him in the eye, mostly) when Sonny and Denise rolled in, and our luck changed.  They were on their way from Las Vegas to San Diego with an empty truck bed and open hearts, just the people we needed to run into.  So we got a ride to Barstow, 60 miles down the road, where we camped out in the parking lot of a department store, and nobody had heard of the bike shop that was supposed to be our salvation.  We eventually did find the bike shop, but they didn't have a 27" road bike wheel (they only had motorcycles and a few BMX bikes), neither did the department store, the pawn shop, or any of the thrift stores in town.
No luck in the repairs arena, and one of my wounds was looking pretty gruesome, so I loaded my poor, one-wheeled bike and all my gear into a shopping cart and wheeled it across town to the clinic (this was a major improvement upon dragging the one-wheeled bike along on its own.  Much less labor intensive). 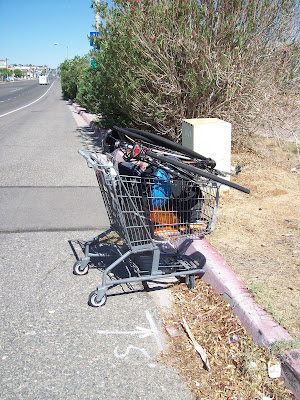 A couple of x-rays revealed that I had not dislocated my shoulder or broken any bones (yes!) and a few stitches took care of the cut on my elbow.  Good as new!  I had never had stitches before, was very nervous and, for the record, they were not bad at all. Whew! 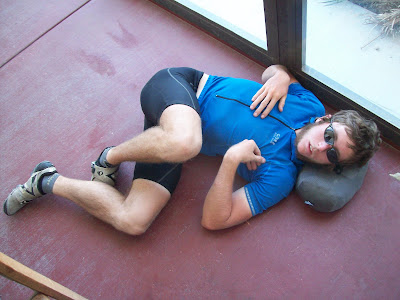 While I was getting stitches, Ryan was getting cozy in the entryway of the clinic
Battered, bruised, road-rashed, stranded in Barstow with no front wheel.  It was a perfect time for an angel to descend upon us and carry us in her chariot 110 miles across the desert to Yorba Linda.  Sandy came to the rescue and delivered us to our next scheduled stop, the home she shares with Rick and Alana, also known as paradise, where we have jacuzzied and secured a new front wheel, and should be ready to roll out for Santa Barbara shortly, only a two-day ride from here.
Posted by Dwight at 5:42 PM