All roads lead to Santa Barbara 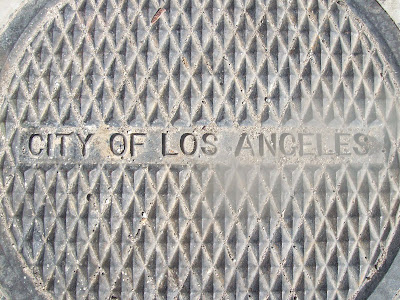 We rolled out of Yorba Linda with the intention of reaching Ventura on the first night, but, in spite of our ambitions, were happily ensnared about 40 miles down the road in the hospitable arms of Ryan's (and now, I hope I can claim them as my own) friends, Brendon, Larla and Stanislava in Culver City.  They prepared us a hearty meal and shared music and spirits with us before taking us out on the town.  They are a fun, warm-hearted trio and, though I was initially eager to be getting on, I'm really glad we took the time to stop and hang out with them on our final evening before the end.  Ryan was courageous enough to let Larla give him a ride in a shopping cart we found on the street at midnight, and nearly paid with his life.  Thankfully, he sustained no serious injuries, and we were still able to continue our quest the next day.  We set out, in routine fashion, later than planned, leaving ourselves about half the daylight we needed to finish the roughly 100 miles to Santa Barbara.  We rode down to Venice Beach, our first sight of the Ocean, and continued along the (very crowded) bike path up the beach to Malibu, where we got on the Pacific Coast Highway.  The road strayed from the coast and became a bit elusive in Oxnard, where we ended up on route 101 for a bit, and I was forced to face my nemesis, the long-slotted storm drain, around every bend.  Thankfully I was a bit too clever for the son of a gun, this time, and did not fall for that gap-toothed grin, again. 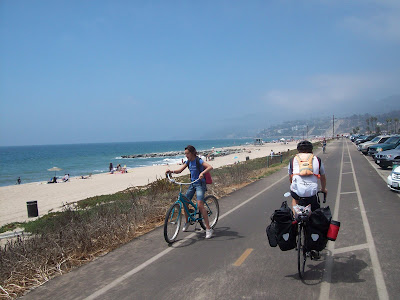 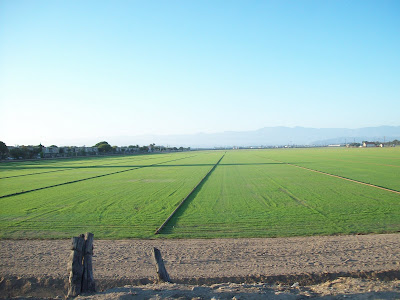 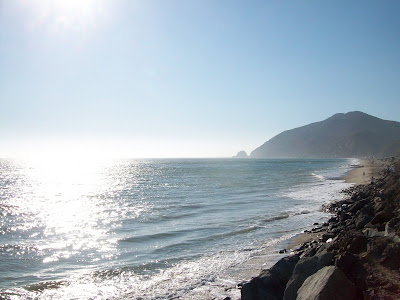 From Ventura on we had bike paths all the way to Santa Barbara, some times winding along the coast where we could see the oil rigs lit up like Christmas trees out on the water, sometimes climbing up along the highway, sometimes wedged between two chain-link fences and illuminated like a little bicycle highway in its own right.  Those last 26 miles seemed, to me, impossibly long.  Every little town we passed through I was sure had to be Santa Barbara, but was disappointed to see signs proclaiming them "Carpinteria" or "Summerland."  Where is this place?  This road must just keeping stretching on in the dark, with intervening towns erupting from the growing asphalt to fill the space.  At long last we started seeing signs for the Santa Barbara waterfront trail, and rode between rows of tall, dark palm trees, with the lights of houses burning on the hills to our right, and the ground descending down to the water on our left.  And before long we were standing at the foot of Stearn's Wharf, and a friendly night worker had plenty of unsolicited advice about places to camp, but Ryan was already on the phone with Alec, cousin of our good friend Pietro Crespi, and we didn't need to know about campsites here or any where, any more. 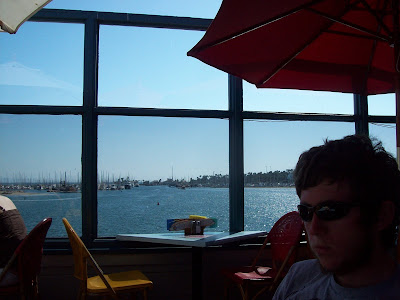 Celebrating at a roof top bar with Pina Coladas, Stearn's Wharf
Ryan had said that the end would come quicker than we thought, and that it would have to be anticlimactic.  "That's it?"  He expected to say.  And as we ate lunch in Malibu I was thinking he was right, that we couldn't actually be here, already, on the Pacific Coast.  No way.  I think it was good, for that reason, that we didn't stop there, when we first met the sea, that we continued up the coast to the endpoint that had been in our minds for the last two and a half months (and longer), not only because it didn't really seem finished before then, but also because those last, interminable miles in the dark, which drove me close to madness with anticipation (unable to take my own advice) made the arrival that much sweeter. 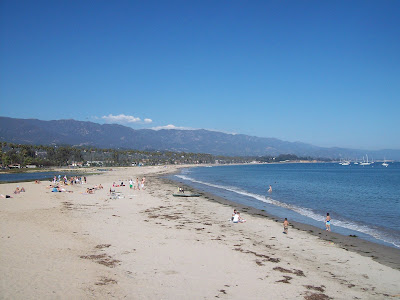 Santa Barbara
Ryan has given some of these thanks, already, but I think they need to be reiterated.  Thanks to everyone who has welcomed us into their home, or onto their lawn, or has offered to do so; to everyone who has taken care of us, fed us, given us water, let us use a computer or a telephone, helped us out with equipment or repairs, given us directions, advice, or  words of encouragement, or drawn us pictures, or sent us mail, let us shower or do our laundry or swim in their pool, had patience and given us plenty of room while  passing us on the road, given us rides when we were stranded or broken down, let us float on their pontoon boat, let us get away with camping where we weren't supposed to, built and maintained roads and signs for us to follow or bridges for us to cross, manufactured bikes for us to ride, bought us hotel rooms, taken interest in our journey, and done a thousand other turns of kindness that escape my feeble memory.  Thanks to wilderness for giving us a place to sleep so much of the time, and for not eating us alive.  Thanks to dogs for keeping me on my toes.  Thanks to anybody reading this for giving us some one to write to.
Thanks to my faithful friend, Ryan, for sharing this journey with me and for having the patience to stick with me, through thick and thin, all the way from one coast to the other.
Posted by Dwight at 2:23 AM

High five. You are a testament to the adventuring spirit, to the fortitude of the human body, to the freedom of the open road. And to the legacy of travel writers; I’ll miss your very well-written blog.

this sounds totally awesome. glad to hear you made it safe and sound. i'm particularly interested by your understanding of nature as a source of comfort and sustenance for humankind. men are like plants!

yeah, anyway, enough of that. i hope you are recovering well. hope to cross your path soon (visit philadelphia and ye shall be rewarded).

Anonymous said...
This comment has been removed by a blog administrator.
December 6, 2008 at 4:09 AM