Dave and Denise
From the wonderful stay with Dave and Denise in St. George, Utah, we rode 120 miles (our biggest day yet) to Las Vegas, NV.  Oh YEAH! 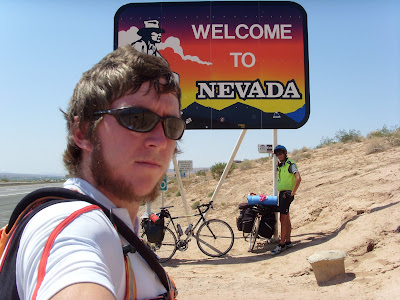 The whole ride was through the desert and some of the hottest and driest weather, yet (you couldn't leave your mouth open for one minute before you were choking from lack of saliva).
We had set out from St. George well rested and fed, thanks to Dave and Denise, to take on the desert and arrive in Vegas that day.  It was a challenging goal but we were unexpectedly, very well assisted along the way.
I was a bit ahead of Dwight on my way south-west on route 15 to Vegas when I caught up to a car pulled over on the shoulder of the road.  I first thought it was just another over-heated car but as I got closer, a man stepped out of the car with a couple water bottles and flagged me down.  We talked for a bit, his name was Scott.  Scott's a bicycle enthusiast and has done supported tours in the past.  He was interested in our story because we were self-supported and he mentioned that he was looking forward to planning a self-supported tour in the near future.  At the end of the conversation he asked where Dwight and I planned on staying that night.  I told him, like normal, we didn't have anywhere specific planned to camp and that this was our normal practice.  After finding out that we were roughing it, he reserved us a hotel room in northern Las Vegas.  The hotel was beautiful and had a free continental breakfast we took full advantage of.
Then!  If Scott wasn't enough...I ran into another two cool guys.  Drew and Saul were on a road trip from Utah to the coast of Cali in their old-school VW bug.  They pulled over in the same fashion as Scott did, Drew hopped out of the car with some water bottles and Saul hopped out with some energy GU.  I talked for a while with both adventure enthusiasts and took some pictures.  They were all about they trip and full of congratulations and pats on the back.  It was great that they stopped to help me get through the desert and it was even more cool to meet two more awesome west-coast kids.  It turned out that they were photographers, too!   The following are the pictures they took and sent to me. 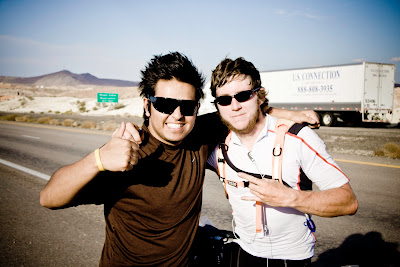 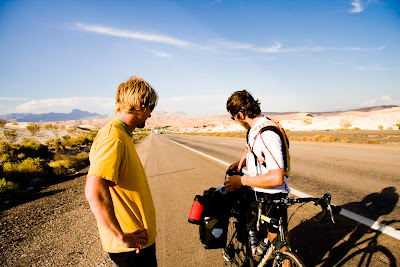 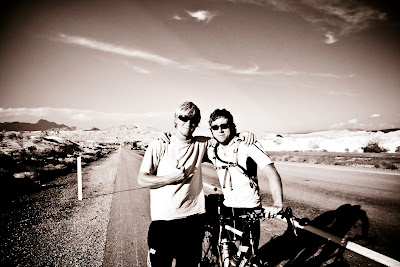